In preparation for an upcoming Hardcore Hearse Club Show where we will be showing Frankenhearse and also be in the presence of Butch Patrick, I decided to bust out my pencils and draw another one of my favorite sitcom family members..Eddie Munster.

I call this one “Vroom! Vroom!” because it is inspired by the Hot Rod Herman episode and the fact that the hearse show will also include replicas of the Munsters cars at the event. I didn’t want to draw the photos I saw online so I literally froze the screen to get the shot when Eddie is explaining to Herman all about drag racing and how he should go to the track and race his friend’s Dad. He tells Herman and Lily he is a sure win because Herman “is the best driver in the whole world!” Lily gets a good laugh until Herman agrees and loses the family car. That is until Grandpa builds Dragula and wins it back!

Are you a spooky sitcom fanatic as well? Prints of both Eddie and Lily are available in my Etsy Shop! See more of my portrait work on the Spitting Image page of my website!

In May I had the honor of having Sheri Moon Zombie post my Tasty portrait on her website and social media pages. I decided to send her my latest 500 To 1 piece that I just finished last night. Woke up this morning to see she has featured it and even referred to me as one of her “fav fans” 🙂

Here are screen shots of it on her site and social media pages. Please click on them to be brought to the page and show my work as well as Sheri some love for sharing it with her followers. 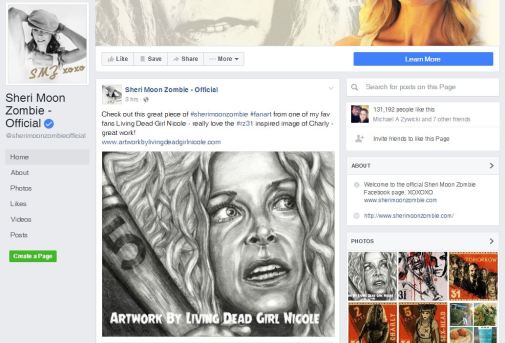 As you all know from my many posts, that I am a big Rob and Sheri Moon Zombie fan. My husband and I were joined by my brother and 2 of our friends on Sept 1st for the special 1 night screening of Rob’s new movie 31. I was immediately inspired to draw Sheri’s character Charly. I was actually anxious to draw her prior to seeing the film but then after I saw it I was determined more then ever.

This is the 3rd portrait I have done of Sheri. I have had the honor of meeting her twice and giving my work to her one of those 2 times. Maybe one day I will run into her again and be able to give her this piece as well. She is not just beautiful and talented. She an overall really sweet person and is very loyal to her fans, making her that much more inspiring to me.

I call this new piece 500 to 1. Anyone else who has seen 31 understands my inspiration for the name of this piece. Anyone who hasn’t seen the movie yet will understand it once they do.

For all my fellow Zombie Heads out there, prints of this piece are available in my Etsy shop! See more of my portrait work including past pieces I have done inspired by Rob and Sheri at the Spitting Image page of my portfolio site.