Last month I announced the addition of my new Dead Girl Decay portrait necklaces. Well, I am happy to announce that I have added 11 more necklaces to this unique wearable art collection. And like the last set, there is currently only 1 of each available.

Check them out and purchase them in my Etsy or Amazon stores!

Part of my Portrait Bucket List has always been to do something inspired by Hellraiser. As horror geeks, my husband and I sometimes have Hellraiser movie marathons and have even had the honor of meeting both both Doug Bradley and Ashley Laurence (both really incredible, down to earth people. If you get the chance to meet them at a con I highly recommend you don’t miss out on the opportunity!).

Despite being such a fan, the only piece of art inspired by the film that I have done was a custom Pinhead barrette that I made for a client. I will say though.. it came out pretty killer and the client loved it. To this day I still half tempted to make one for myself!

So needless to say, when I saw that Clive Barker himself was calling out to artists to submit their work for an upcoming Hellraiser Anthology book I jumped on it. It being a contest I wanted to do something different then the usual expected Pin Head portrait. I also wanted to incorporate my love of woman in horror and my signature split faces that I love to do. Now you would think I would’ve went with drawing Ashley as Kirsty but the thing is I have always wanted to draw a Cenobite. And what better Cenobite to draw then the Demon Princess turned Cenobite herself… Angelique (played by Valentina Vargas).

So as Pinhead would say, “I have such sights to show you”.

I have entered it into the contest and I will say, even if I don’t win anything I am just excited to know that  Clive Barker, king of dark art himself may actually see a piece of my work and that makes my creepy little heart heart skip a beat!

If you are a Hellraiser fan as well, you can purchase prints of this piece in my Etsy shop! And if you want to see more of my portrait work, head on over to the Spitting Image page of my portfolio site! 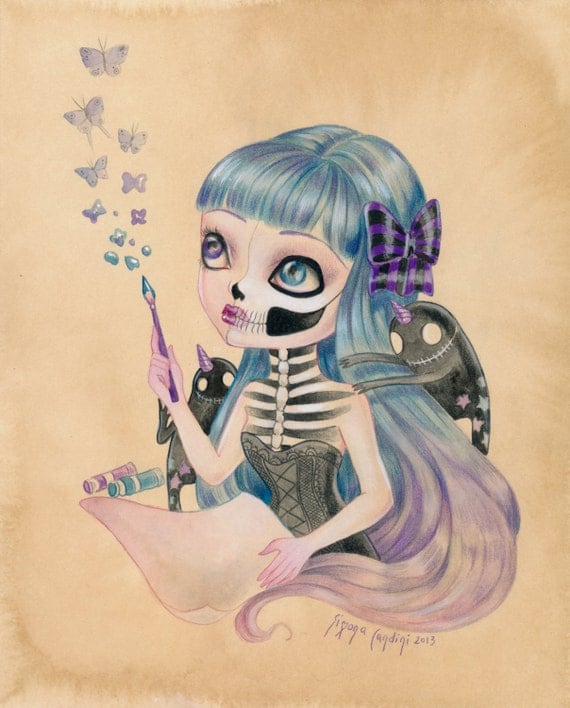 Yesterday we brought our tradition back to life. After 3 years of hospital stays and the bills that come with them we have not been able to go to my favorite place to visit in the summer.. the Renaissance Faire. However despite how humid and hot it was yesterday we made it this year. They even had a new photo backdrop that I think was painted just for us ha ha….

I also want to give a shout out to Steam Wolf Symphony for making my vision of a devilish evil queen headpiece come to life and to Kalaidescope Wear who made my waist cincher corset and matching bag (from the leftover material of Frank’s wedding vest – which he now wears to the faire)!