Sheri Moon Zombie was looking for artwork to feature so I sent her all my pieces via Tumblr. Well she picked one of mine and featured it on her site and all of her social media pages. From my past posts I am sure you all know how much I adore her and how much it means for me to have her feature my work. She actually owns my “The Zombies” portrait that I gave to her backstage at Rob’s show back in 2007. It was during a Total Skull Meet and Greet that both Frank and I got to participate in because we were such big supporters and fans. It was my 2nd time meeting her and she was just as amazing to talk to as the first time. Always remembering who I was and calling me out by my name. Such a dream.

So enough reminiscing… here is a screen shot of “Tasty” a portrait I drew 11 years ago featured on Sheri’s Official Website! It is of her as Baby Firefly in House of 1000 Corpses. 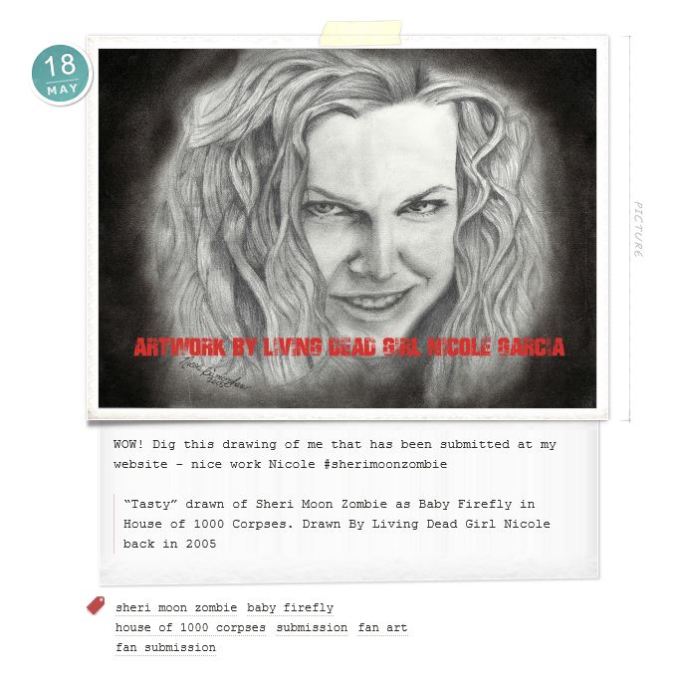 So if you can go give it a like on her pages. Support my work but also give her a like for featuring me! She has it up on her site that is through Tumblr.

Go to the Creature Features page of my Official Website to see more places my work has been featured!

I love my killer team!! We just posted our first Ghoullery Feature! Go check it out!

Etsy Massacre Team’s Bloodspot: “I Know What You Did Last Summer” Ghoullery Feature.

Very excited to announce that Niji Magazine has featured me as an artist and my work on their magazine site!

I am on the front page of their site today and have a full feature here.

It appears Etsy is featuring Popular items for fifteen dollars! Among those items being featured  is my $15 gift certificate!