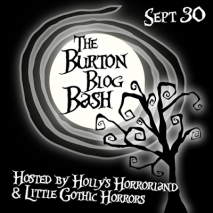 Hello subscribers and Burton Blog Bash hoppers! Thank you for taking the time to check out my blog today as we celebrate  the genius that is Tim Burton and the release of Miss Pereguine’s Home For Peculiar Children. Some of you may have learned to like his work later on in life but for me.. his work has effected me since back when it was “weird” to like the types of things he created. Especially for a little girl.

When I was 7 years old Beetlejuice came out and it instantly drew me in. I remember some kids being scared of Beetlejuice. I was one of those kids yelling his name hoping he would make an appearance. Envious of how cool it would be to live in Lydia Deetz’s shoes. I guess you can say I still admire her. I have her tattoo’d on my arm. My dad even walked me down the aisle to the Beetlejuice intro music because not only did my Dad introduce me to the movie but my husband and I bonded over it when we first started dating (he now has the rest of the cast tattoo’d on his arm). It was a very important part of our ceremony and so symbolic. Who better then Danny Elfman to set the mood for our Halloween Masquerade reception.

When Edward Scissorhands came out, I remember thinking whoever made these films was some sort of genius. When you are younger you really don’t get into who made what when it comes to movies. You just watch them, love them or hate them. However Tim Burton’s films were like nothing I had ever seen and when I found out the same man made Beetljuice it clicked that this man was different. When I found out he did Pee Wee’s Big Adventure my mind was blown. He was talented and he had something no one else had when it came to making movies (I was a smart kid ehh ha ha). When I was really little,  Jim Henson was always my hero as far as fantasy movie makers were concerned. As I was beginning to get older, Tim Burton crept his way into my heart as well. He had this way of bringing macabre visions to life but making them whimsical which amazed me (and still does).

Which brings us to when the previews came out for Nightmare Before Christmas when I was 12 years old. I still have the newspaper clippings I cut out of the newspaper in anticipation for the movie to come out. The fact that it was clay animated completely awed me and the characters seemed so intriguing. I guess you can say I was a little like Jack when I saw the previews… “What’s This?” “What’s This?” 🙂 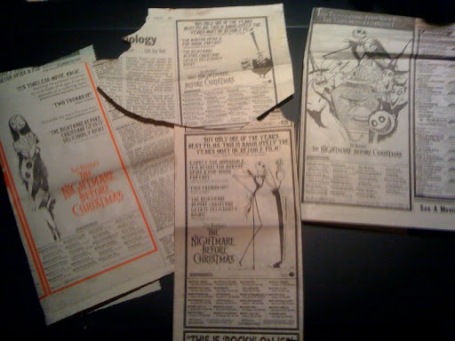 Not only did I have these clippings because I was excited about the movie, but I used them to draw the characters as well. Stashed away with the clippings are my sketches from back then. They make me smile to look back at. So not only did Tim Burton entertain me, he also inspired me to create!

The great thing is he still does. Over the years all of his movies have continued to draw me in. These are just a glimpse of some of the things I have conjured up over the years inspired by him. Click on any of the images to see them on a larger scale.

What Nightmares Are Made Of Portrait By Living Dead Girl Nicole 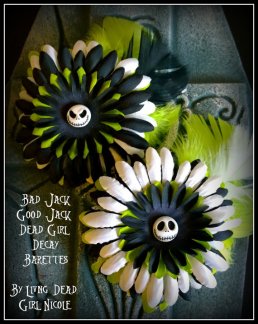 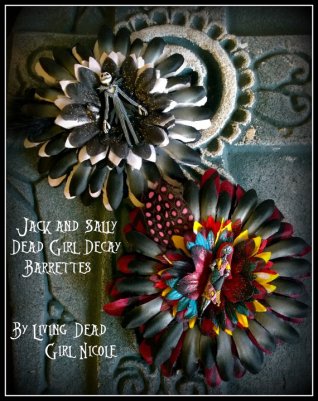 Jack and Sally Barrettes made by Living Dead Girl Nicole 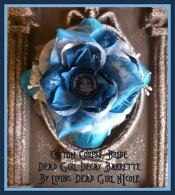 I don’t have enough time or space to include all the clothing and home decor I have collected over the years. ha ha. But I can add to your collections. So to give back to all the people following this Burton Blog Bash I want to give you all a coupon code that can be used in my Etsy shop TODAY ONLY! Use code BURTONBASH at check out and get 15% off your order!

Don’t forget to also check out all the other blogs participating in today’s blog bash! All bloggers will be posting about Tim Burton so you know they are worth stopping by and checking out what they are posting! If this is your first time stopping by my blog please follow and subscribe!