Yesterday was so memorable I don’t even know where to begin, but I know this post will be long because there is sooo much to share! When we first got to Walker Stalker Con I had so much to carry because I had so much to give. This was the first con where I had multiple pieces of art to give because there were so many of my favorites at one single show. Since Katharine Isabelle was the original reason I purchased tickets I decided to represent amongst all the Walking Dead peeps by rocking my American Mary shirt and bird skull necklace (which I bought at Strange and Unusual when we were in Philly because it reminds me of Ginger Snaps). Plus it was Memorial Day weekend and my American Mary shirt is quite “patriotic” ha ha

When we first got there we took everything in and right away headed towards the celeb areas. I wanted to meet everyone first so I knew after all that money was gone how much I had left to splurge on. I also was just so damn giddy to meet the people I had my mind set on meeting and didn’t want to carry all the artwork around with me all day. A word of advice to anyone that has never been to a con. Go with a plan.. budget for that plan and then bring extra splurge money. It works way better then winging it. Trust me! Been doing it for 12 + years!

Katharine was doing photo ops but lucky me Denis O’Hare was directly across from her and he was at his table. We stood in line for a little while because Denis is absolutely amazing and takes time with each fan to shoot the shit with them and give them a memorable experience. When it was our turn to meet him, I pulled my “We All Have Our Flaws Kitten” portrait out and handed it to him and his jaw dropped and he said “I’ve seen this before!!! I specifically remember it because I was amazed by it!” {insert my giddy smile, heart drop moment here} He then asked me how I had it and I laughed and said “I drew it! This is the original and it’s all yours!”

He was thrilled. He asked me if I had ever drawn something like it before because it was so unique. I told him that it was my first attempt at mashing up 4 characters into one portrait and the first time I attempted doing black and white with selective color. I also told him he probably saw it online because a lot of his fan pages have reached out to me asking if they could share the piece with fellow fans.

He was just as amazing as I had anticipated him to be. I also got to see first glimpse photos of him as Poe at his table! I can not wait to see what he brings to that role. I am sure it will be just as incredible as everything else he does. The man is pure talent and absolutely amazing to his fans.

He also had a note on his table’s dry erase board asking people to tell the networks that Liz Taylor deserves an Emmy. I could not agree more! In my opinion he was the star of AHS Hotel. I know many felt it was Lady GaGa as the Countess (who did a great job) but Liz Taylor was such a memorable character.. and that was all because of Denis! I have been a fan of his since his True Blood role as Russel and have always been excited to see him in new roles. But if you were never a follower of his work before and then you take in his character as Liz Taylor you will be hooked! He is just incredible. 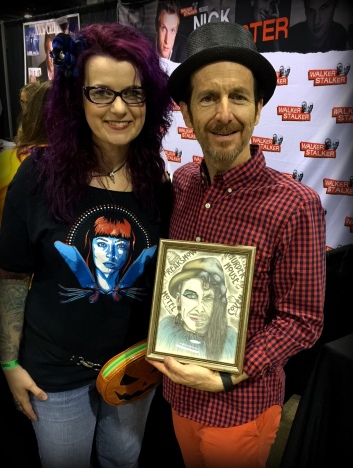 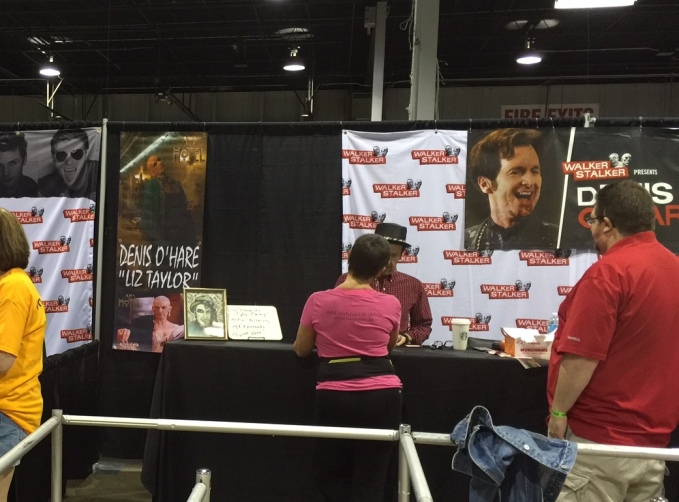 I could’ve literally skipped away like Dorothy in the Wizard of Oz after my experience with Denis. I was on cloud 10 (because cloud 9 is just not high enough).

While we were meeting Denis our friends went over by Chandler Riggs’ table in hopes to hold a spot in line for us. Go to find out they were passing out these blue tickets with numbers on them for specific line times. Pure genius! It was like getting a Line Hopper pass at Disney or Great America. More cons need to jump on this idea! I have stood in lines that have wrapped around buildings and it sucks. You miss out on so much going on at a con because of lines. This eliminates this issue! They had already grabbed me a ticket so we were all set.

The only downfall was that meant walking around all day holding Zombie Carl who is as heavy and then some as a real human head ha ha. Not to mention trying not to get him spilled on or bumped into in the crowds. However the plus side is I got stopped all day long with compliments and people asking me for my card! I also networked with a few people who I may do work with in the future! My arms hate me today but it was all well worth it.

By this time Katharine Isabelle (eeeek) was back at her table and I could not be more thrilled. Frank was teasing me in line saying “Baby.. that’s Katharine Isabelle and your about to meet her” ha ha. She too was taking time to talk with fans and was a complete doll to everyone.

When it was my turn to talk to her I was super cheesey happy. She told me how much she loved my hair and I told her how she has been one of my favorite actresses for like ever and how much I admire her work. I pulled out my “Out By 16 Or Dead On This Scene” portrait  and told her I drew it years ago and have been holding on to it hoping she would come back to Chicago. I told her about how each time she was here turned into a missed opportunity for me because of our wedding and my multiple surgeries etc.  She loved it and was thinking I wanted her to sign it and didn’t want to ruin it she said “you don’t want me to sign on this do you?” Frank and I both at the same time said “oh no it’s for you!” She was happy and told us about the room her boyfriend has turned in to a gallery of the best fan art work she has received. How she will have to fight her mother not to take it so she can add it. She said the room freaks out her friends since it’s all of her face ha ha. I told her the great Elvira has the same type of room and calls it her “wall of shame” because it’s all of herself ha ha. She loved that.

We also talked about Ginger Snaps in general and she told us how she recently made her boyfriend watch it and he had no idea how amazing it really was and was brought to tears. I told her it is a horror movie classic and she was the reason it was so incredible. Her brother took multiple photos of us but this one is by far my fave. Not only cause I look SOOOO happy to be standing next to my woman crush/favorite actress but because the look on her face shows how much she dug my work. It’s priceless and worth all the years I held on to this piece to give it to her! 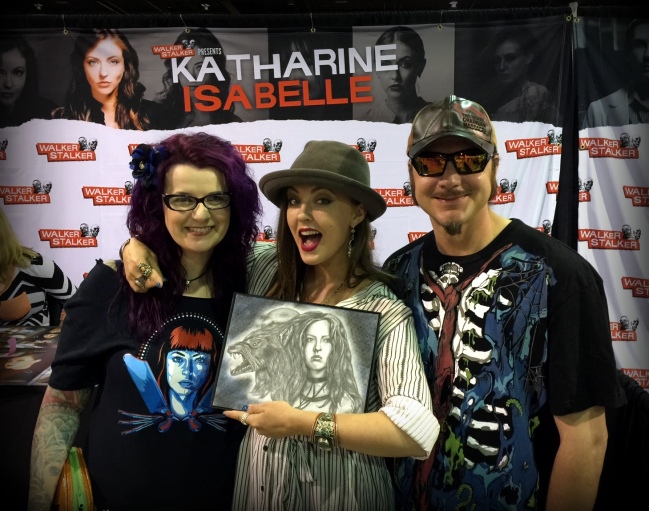 Last but not least it was finally our time slot to meet Chandler Riggs. Frank and I got a complete kick out all the young girls in line in complete awe of him. They were pointing at him “there he is…. oh my god we are getting closer”. It was so cute I was actually excited for them ha ha. I wish these types of events were around when I was their age. Many of them asked about my Zombie Carl and couldn’t believe I had made it.

When we finally got up to Chandler I set the box down on his table and said “Well I made you a Zombie Carl ha ha and I am so relieved to finally give it to you because I have been carrying it all day long waiting to meet you!” ha ha ha. He was like “Whoa! This is awesome! Oh my god. You made this? What is it made out of ?” He was holding it and checking it out as we talked.

We told him a general idea of the stuff I use to make them and told him I was really happy how much he liked it. I could tell he really appreciated all the hard work that went into it because he kept saying “Wow” and “this is so awesome”! Despite the kid being adorable and so talented he was a absolute sweetheart.

I also showed him a photo of my nephew Michael dressed up like Carl this past Halloween. He was really impressed and said he looked really awesome. When all was said and done I made sure to text my nephew and my brother and tell them about it all.

To make things even better I check my Instagram this morning and see this post by Walker Stalker Con that said Chandler had the Zombie up on display at his table today! So cool of him and so cool of them to share it with everyone! 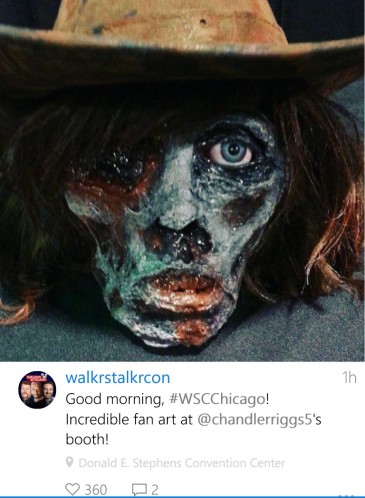 So after all the amazing meet and greet time we had we decided to really appreciate and take in all the vendors and drop off our box of Bisquick to Michael Cudlitz for his food drive #bisquickchallenge. His line was constantly busy so we ended up giving our box to a volunteer. We did get to splurge on some really cool new duds…. 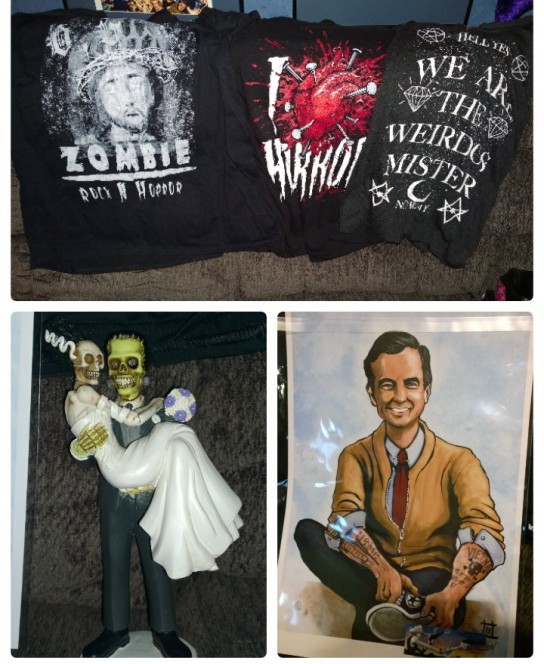 Frank got a OG Zombie Jesus Shirt, Resident Evil Contacts (no pic since they are in bottles) and a Mr. Rodgers Bad Ass art print. I got a I Love Horror shirt and a We Are The Weirdos/The Craft tank top. We then saw this Frankenstein and Bride figurine at a table on our way leaving the con and had to buy it. It reminded us way too much of our wedding 🙂 We now have it displayed next to our wedding photo in our living room.

Now we are broke, tired and sore but it was sooooooooooooo worth it!

Tomorrow is gonna be one helluva day! I am definitely going to have trouble falling asleep tonight. So much anticipation! 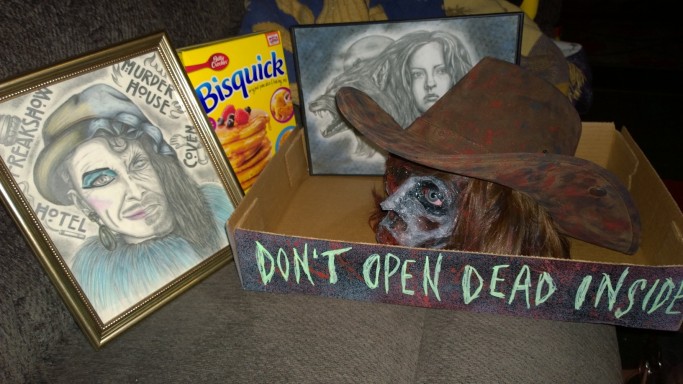 And so much to carry ha ha ha!