Due to the popular demand of the band name Parabellum my husband’s band has decided  to change their name to Axe Man’s Bridge. I created them a few new banner designs representing the new name. 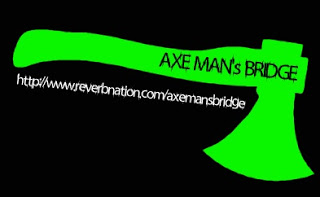 Their reverbnation link has changed to www.reverbnation.com/axemansbridge. They are currently recording tracks so music will be on there soon.

I also designed what is going to be used for their first show flier! 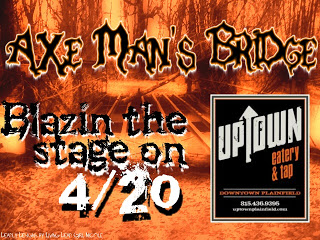 Like Loading...
As I have mentioned in my previous posts and in my links on the side of my page.. my friends are in the band Expired Empire.
A few weeks ago me, Strazz (the bassist), my best friend Regina and my husband Frank made some hand made hats for their merch table and I posted pics of the end results.
This hat that I made ended up being a favorite amongst the fans.. 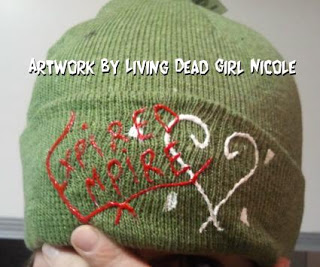 It has their heart logo that Strazz designed (2 backward Es that form a heart with the dashes that make a x like visual around it) and the bands name going across it. Regina actually came up with the concept to over lap them when we were discussing a stamper idea I had  :). Then I made it happen by making the actual hat. A fun creative collaboration.
Since it was liked so much the band asked me to sketch it up for t-shirts. So I used prisma colors on black sketch paper…….. 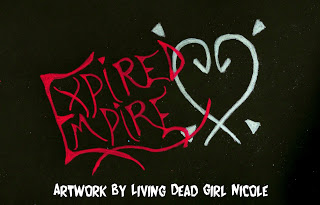 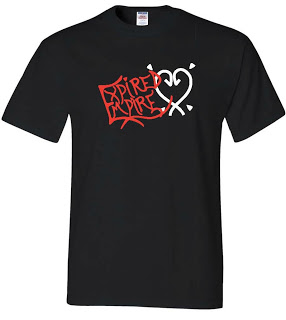 These shirts are being printed as we speak and will be available once they are done.
For more info on the band Expired Empire visit them at Reverbnation

Like Loading...
So for a few months I have been anticipating that Orgy was coming to a tiny little venue in my hometown. But what I was more anticipating was getting to see One Eyed Doll who has been touring with them. I looked into them a few months back when I saw the line up and became a fan of theirs on Reverbnation after listening to their music, watching their videos online and reading on Wikipedia that the lead singer was “Gwar meets Strawberry Shortcake” 🙂
I have always been a big fan of  woman that can lead a band, rock out on guitar, sing like an angel and scream like a demon. So I was instantly hooked.
When I got to the show I immediately took a look around and saw the lovely lead singer Kimberly over by the band’s merch table and decided to pay her a visit to tell her how awesome I think the band is and how original and unique I think they are. She was a complete sweetheart as expected and thanked me for my kind words. I bought a shirt that had Kimberly holding a big butcher knife in her hand (how could I resist that one right ha ha). We talked about the artwork on their albums and merch as well as the wonderful artwork I saw on their website that her very talented mother does of the band and had a really nice conversation.
When they were next to go on stage I made my way to the front as I knew if the show was anything as good as their videos online then I knew I wanted to be up close to experience it all first hand.
I was so close that I was able to get Kimberly head banging in my face on video ha ha.
This is them performing Be My Friend which is a song about how hard it is to make friends when your a serial  killer 🙂 how can you not love that!!??!!! 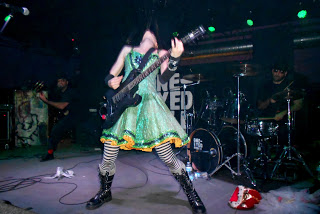 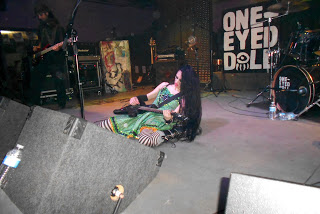 She rocked out so hard that that she actually jumped in the mosh pit still playing guitar and started to mosh with everyone.. it was great! My husband Frank was even impressed ha ha. 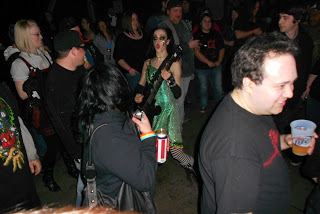 And a pic of me with Kimberly after the show.. 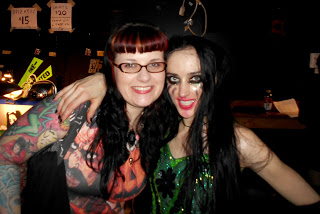 (To see the rest of my photos from the show check them out HERE!)
Since then I contacted the band and signed up for their street team because they are just so inspiring and kick ass! Kimberly emailed me to tell me that she checked out my art site and that she loves my artwork and is happy to hear I am making her a one of a kind Dead Girl Decay “one eyed” barrette!
Once I get it done I will definitely post photos of it.
“Serial Killers Are People To!”
LDG Nicole 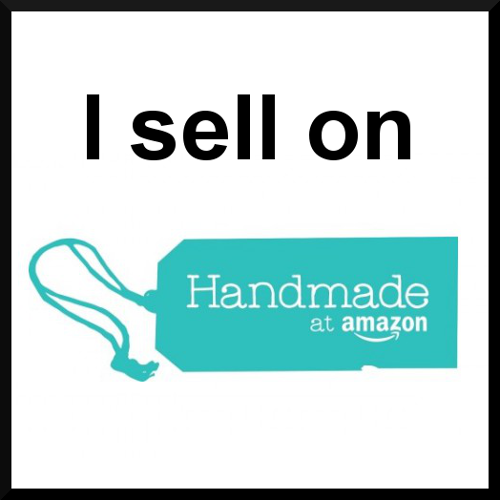 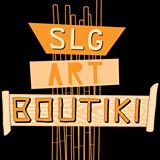