They are having a pumpkin decorating carving contest at work for the first time this year.. so of course I had to enter. I tried to think of something I love and how I could turn a pumpkin into it without carving and not using stencils online (cause I knew the competition would do that)…….
……………and due to my obsession with Muppets….Count Von Pumpkin was born!!
﻿

Any one that knows me knows that I adore Rob & Sheri Moon Zombie. Well my obsession led me to a kick ass magazine back in 2007 called Girls and Corpses Magazine. I had never heard of it until I heard word that Sheri was going to be their very 1st cover model for their 1st ever printed copy of the magazine (before that they were an online mag). So of course I ordered it. And figures me and my husband got a huge kick out of it. When friends stopped by they asked “What the hell is this?” and then couldn’t put it down.. saying “Only Nicole & Frank would have a coffee table magazine like this!” ha ha. My husband’s friends often teased him that one day he would see my face in their magazine.

Well that day has come.. well not the way they intended seeing me in the magazine ha ha.. but my Letter to the Deaditor complete with my photo with George Romero and the zombie head I made of and for George has been printed on page 6 of the Summer Volume 4 Issue!!! The people at the magazine are so awesome and were so excited to feature my letter and photo which really made me so happy!! I received a copy of the magazine today in the mail!! And could not have been more excited!!

If you like hot chics, horror movie icons, hilarious parody ads, comics, great art, and the undead…. GO Buy a copy!! The magazine is wonderfully insane! For real!

If you hadn’t noticed I recently added a photo of a new zombie head I created to my Adopt The Undead page. I call him “George”. I named him George because his likeness was based off of the King of Zombies… George Romero.

Yesterday we drove to Indy for another horror convention. We knew he was one of the guests and I really wanted to give it to him. The line to meet George was hours long and literally wrapped around the building all the way outside. There had to be atleast 200 people standing there. I was pretty nervous that after all the hard work I might not be able to give it to him. That was until manager Chris saved the day!! He was able to give me the opportunity to go up front with him and personally give it to him without standing in line. I could not have been more grateful. He knew I wasn’t there just to get another autograph but to personally give George a hand made gift.

When Chris walked me and my husband Frank up to him he told George “Nicole here has a special gift for you”. I said “Hi there!! I made you your very own zombie head!” George’s eyes lit up when he saw the George zombie and he smiled and laughed and said “YOU made this!!!! Wow!!!”

My husband was able to capture a photo of me actually handing it to him because with me not standing in line I didn’t want to assume I could get one but wanted something to remember the moment..

But being the awesome guy that Romero is, he told me.. “come back here.. we need to take a picture together with it!!”  So of course I did. You can see how ecstatic I am and how appreciative he is in the photo. It’s worth a thousand words… 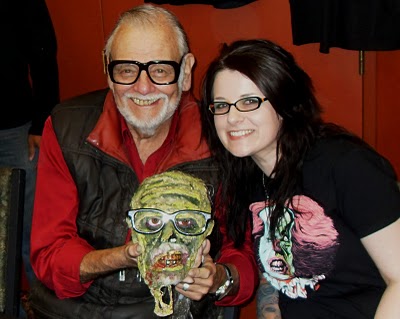 He thanked me and shook my hand and told me he was going to display it on his table the rest of the day. Every time I went passed his table there was Zombie George sitting next to the king of the undead.. George Romero! So incredible.
A very big shout out to manager Chris for making sure I was able to have this opportunity with George that I will never forget!!!! 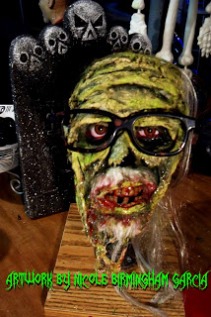 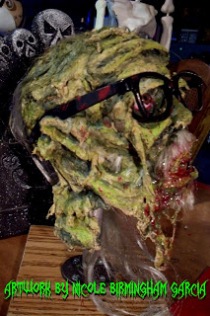 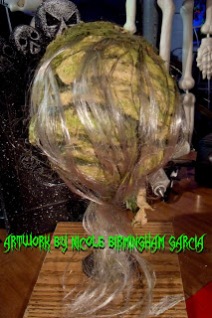