From my previous post about One Eyed Doll  I had mentioned how I had promised the lead singer that I would make her a one of a kind Dead Girl Decay “Kimberly” inspired barrette for her.
After finding out from the message boards that her favorite color is “RAINBOOOoOoooOOOWS!” (see why I love this woman ha ha) I decided this barrette needed to be bright and colorful. And after seeing her in all her glittery glory I made sure to add some glitter to it as well.
This is the first Dead Girl Decay barrette I have made with a realistic looking eye (instead of the usual cartoonish, blood shot ones I normally use) so I could choose a color that was closest that I had to Kimberly’s doll like eyes…
I added a realistic eyelash to the bottom to replicate their band logo. 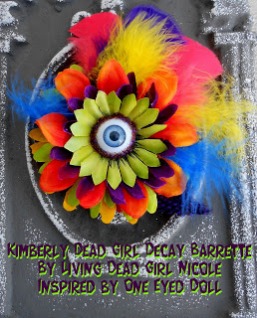 I am gonna get this sent off in the mail this week so when they get back from tour it’s there waiting for her in Texas!
If you have not already checked out this amazing band check them out at http://www.oneeyeddoll.com
Stir Stir Stir The Rice….
LDG Nicole